Here are excerpts of  what Lis Dobb wrote when she  interviewed Karen Paolillo. 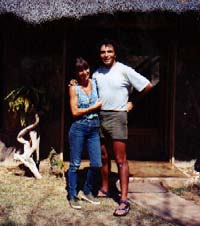 English accent still to the fore, Karen sat up late into the night at her camp perched high above the Turgwe, talking to me about her life, which has included being brought up in a zoo; working as a casino croupier, and being under mortar attack during the liberation struggle; becoming the first woman to qualify as a professional safari guide in Zimbabwe; being offered by George Adamson a job helping with his lion relocation; living in Holland, Gabon, France and Zimbabwe, and finally her work with hippos.

Born in Barnet, England, to a veterinarian father and a mother who ran the children’s zoo at the Duke of Bedford’s Woburn Abbey, Karen spent her early years “precociously introducing other children to the deer that roamed the park.”

At the age of 15 she started to work for a circus during school holidays, but decided that this life was not for her. The film Born Free, seen when a child, created an overwhelming urge to come out to Africa to work with wild animals.

Thinking that life as a foreign correspondent would help take her to Africa, she started training as a journalist, but found the profession “too cynical and lacking in compassion”. Hearing that British-trained casino croupiers were in worldwide demand, she trained as a croupier in Bournemouth. She applied for, and got a job, as a croupier at the ill-fated Elephant Hills Casino in the Victoria Falls, Zimbabwe. After the newly opened casino was mortared and burnt out, she was transferred to Kariba.

“At Kariba I met numerous professional hunters and National Parks personnel, and accompanied them into the bush at every opportunity, while desperately seeking employment in a wildlife-related sphere. It was difficult, because nobody took this English casino croupier seriously. My sex and my size [she is a petite 5 ft. 4 in.] counted against me. No one thought I would be able to cope.”

Finally her tenacity paid off, and a Lowveld rancher offered her the chance of becoming a learner guide with his safari operation to start photographic safaris. In 1983, she became the first girl to pass the professional guides  exam set by the Department of National Parks, allowing her to work in photographic safaris. So good was she that she won a competition to travel to the United Kingdom to promote Zimbabwean tourism. She had, in the meantime, been corresponding with George Adamson, and in 1987 took leave and flew up to Kenya where she stayed at his camp. Adamson offered her a position as his assistant. Before she could take this up, she had to go to the Indian Ocean resort of Malindi to keep a rendezvous with her mother. While out snorkeling there, she met Dr Jean-Roger Paolillo, a French geologist on holiday.

It was love at first sight, and regretfully turning down Adamson’s offer, she returned to Zimbabwe to settle her affairs before joining Jean-Roger at his base in Holland. They were married in the French Alps in 1988, and she flew out to join him in the remote equatorial forests of Gabon. Missing Zimbabwe, she was overjoyed when Jean-Roger found a job in the country. They returned in 1990, to live in a remote bush camp on the Turgwe River, in an area which is now known as the Save Valley Conservancy, in the southeast Lowveld of Zimbabwe.

Joyfully she explored the Turgwe River, walking its length doing a hippo census. Realizing that the Lowveld hippo population dropped dramatically since her days there as a professional guide, she began a personal study just before the devastating drought of 1991/92. When the hippo started to suffer, she decided action had to be taken.

Hers was the original idea of feeding hippo through the drought, an idea which was later taken on by the Wildlife Society of Zimbabwe and the Save our Wildlife Heritage group. However, the Turgwe River had dried up completely, and Karen elected to remain independent of the society’s efforts and commenced her own fundraising. She personally fed all of the Turgwe hippos. Funds for feeding were obtained locally and internationally from generous donors. Care for the Wild International, a British animal-welfare charity, donated funds to lay 19 km of water piping from the nearest neighbors Humani Ranch aquifer and to provide funds to build a deep concrete pan. Due to Karen’s efforts, none of the 13 hippos she looked after died once the feeding and water setup was established. Two of these female hippos actually conceived during the ten month feeding project.

She spent initially around  six hours a day, rain or shine, observing  the hippos mating,watching their calves from the day of their birth, recorded amazing behavior and generally has now  reached a  relationship with these Turgwe Hippos. The Turgwe Hippo Trust came into being  in 1994.

You can Donate or Adopt a hippo 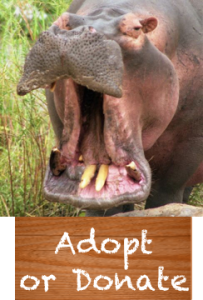 Oephebia, our friend and artist loves the book 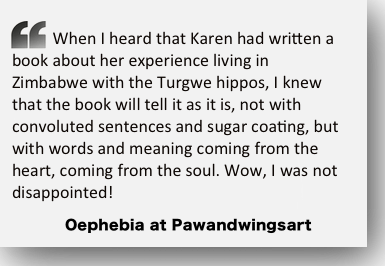 read the full review from Oephebia in this post 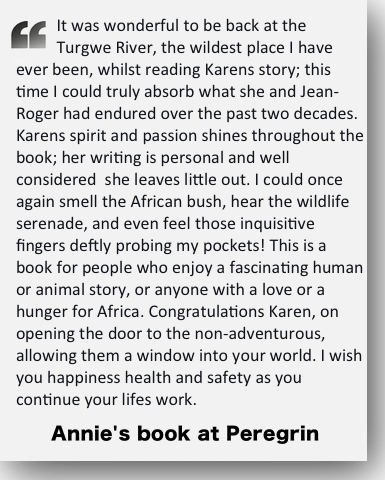 read the full review from Annie in this post 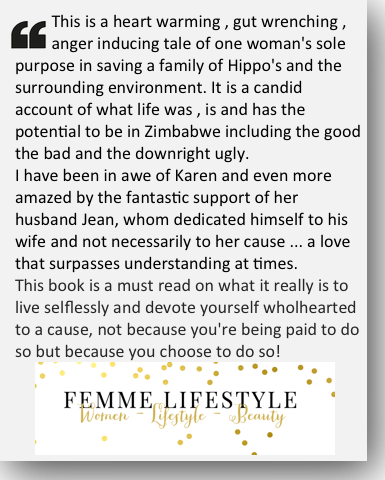 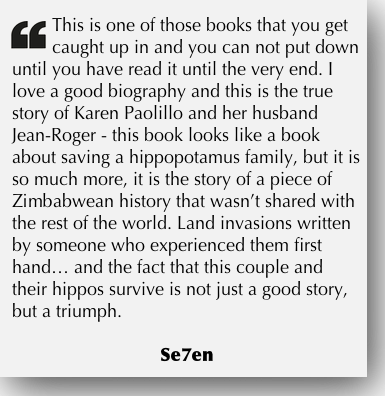 The book can now be purchased on line Internationally at www.kalahari.com or with a personal dedication on my website. 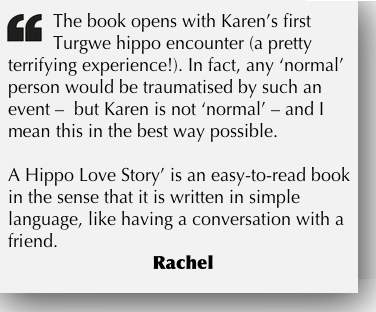 Our friends at Twala Trust 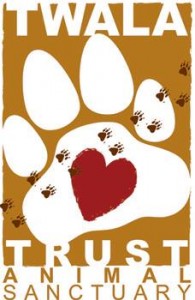 Support us on the Net, adopt our banner.

Dear hippos lovers,
On your FaceBook wall, on your blog or in your website, insert our support banner with a link to [www.savethehippos.info].

Banner size is 750x90 pixels and available with a transparent or beige background.