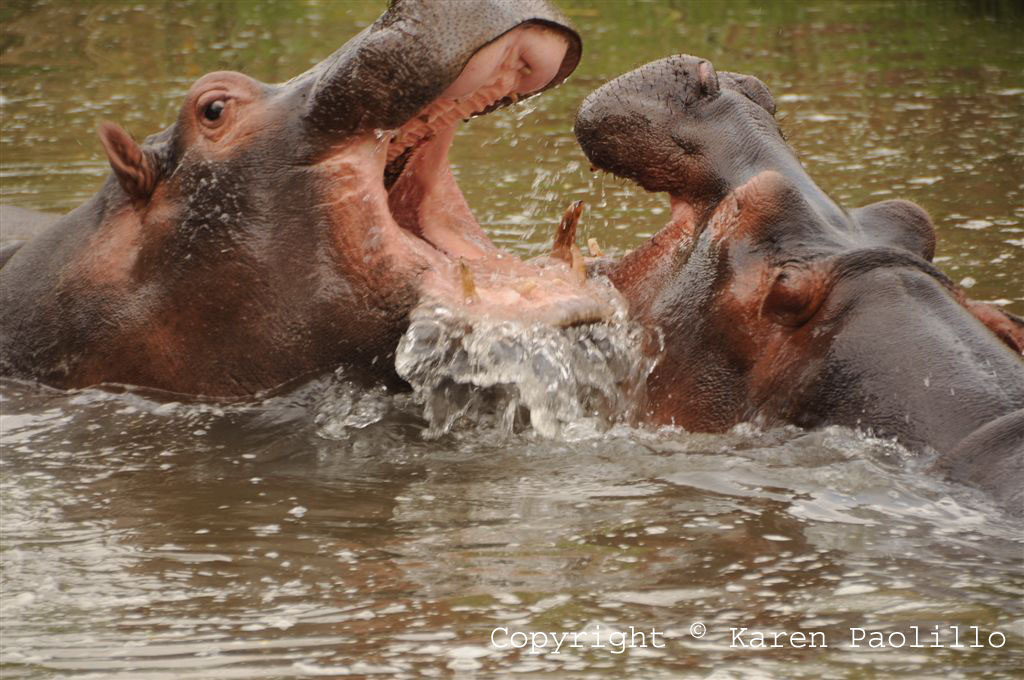 The Turgwe Hippo Trust came into being after the hippos’ lives were threatened during a horrendous drought in the south east Lowveld of Zimbabwe, back in 1991/92. This non-profit Trust was formed after the successful completion of a feeding program and water supply exercise undertaken by the Paolillo’s during those traumatic times.

Karen Paolillo and her French geologist husband Jean-Roger were camping above the Turgwe River during that period. With Karen’s past experience as a professional photographic safari guide, she was aware that the hippos had very little chance to survive once the rains failed.

Jean-Roger as a geologist was working in the area as a geolgist searching for gold while the land was under cattle ranching. Many of Africa’s natural wildlife inhabitants lived there.

In 1993 the cattle fences were to come down and all the cattle removed, so that the various land owners could amalgamate their properties.

This was to allow the bush to return to how it was before man came along with his cattle.

This resulted into the largest private Wildlife Conservancy in Southern Africa being formed, an area of bush covering over 3,000 square kilometers solely for wildlife. The area was named the Save (pronounced Savé) Valley Conservancy.

In the drought though, thousands of animals were to die but around Hippo Haven, the Paolillo’s camp site, this was not the case. Karen sought advice on how to feed in-situ the last remaining Turgwe Hippos. From London Zoo to Zoos in the States, she asked for ideas on what she could feed wild hippos in order to sustain them until the rains came back.

She was the first person in Zimbabwe to feed wild hippos in their natural habitat for the long period of 10 months. So successful was her feeding program that she kept alive the last 13 hippos left in the Turgwe River, and two of the females actually conceived during that period. Not only did she supply every night nearly 1 ton of food to the hippos and other animals that came to her feeding station, but she and her husband designed a large cemented water pan that would allow the hippos to live in and submerge. The hippos’ river, the Turgwe, completely dried up.

They had a pipeline installed to go to the nearest deep underground water bore holes some 19 km (12 miles) away, and they built water troughs to allow the hippos and other animals to drink clean water. Through monitoring the hippos water consumption, she found out that a fully grown hippo would drink 200 liters of water per 24 hours.

Now three decades after the Paolillo’s arrived in 1990 Tembia the calf conceived by Bob and Lace during the first drought of 1992, when Karen fed the hippos, has his own family of 15 hippos including himself.  They live just six kilometers upstream from the Turgwe Hippo Trust.  Born on June 16th 1993, he has fathered many calves and between him and the other bulls 64 calves have been born since November  1990.  Karen’s recipe for feeding wild hippos can be used for ever more. It proved a great success and entails a ration of 45 kg (90 lbs) of high protein Soya bean hay and 3 kg (6 lb) of game nuts or horse cubes per adult hippo a night. Or she used Rhodes grass hay and a survival ration made up of sugar cane, molasses and cotton seed mixed into the hay. Adding horse cubes as an extra protein.

After the drought Karen had found her vocation. Instead of leading tourists in the bush to watch wildlife, she had actually been the catalyst to save hippos and other animals’ lives. The Paolillos approached the owners of the land on which they were camped, the Whittall family. They managed to negotiate at first a lease and later the purchase of the tiny plot of land on which their camp stood. There they themselves physically built their own house a year later. In the meantime Karen’s plan was to have the Turgwe Hippo Trust gazetted as a non-profit organization, in order to put into operation the long term conservation and protection of the Turgwe Hippos.

In those first seven years her ideas bore fruit, and among other achievements she managed to bring to the area two hippos that were going to be shot as problem animals (raiding local peoples’ crops) in another part of Zimbabwe. Kuchek and Dizzy, who reside now at the Turgwe Hippo Trust, are the offspring from these two hippos.

She had a borehole sunk so that the Trust would have its own underground water supply in the case of another drought. She built, alongside seven African employees, another much larger cemented pan situated close by to the Trust. With the hippos increasing in numbers and the Lowveld being a drought prone area, she wanted to be sure she would always have enough water for the hippos if another severe drought occurred.

Through Karen the Trust supplied over 30 tons of cement for the construction of a large weir situated in the Turgwe River, upstream of the Trust’s headquarters. Two weirs already existed, creating pools for hippos to live in. Although this is not an ideal structure to have in a river, the damage had already been done to the Turgwe River a long time before the Paolillos moved into the area.

A dam built in the 1970’s had changed the natural flow of the river, even though the dam is over 80 km upstream. The river has been changed, like so many in Africa, and so needs to be man-managed. The two other weirs had been built for the purpose of pumping water inland for cattle. So a third weir at the Majekwe section of the Turgwe was built so that wildlife could have more water inland and for hippos to get a new habitat. This cement donation, hopefully, did show the owners of that specific property, Mokore, that the Trust could be beneficial to them. Karen hoped that the hippos would be looked upon as being beneficial to their property as an animal to be watched through the eyesight of a camera and not the sight of a gun.

By this stage sport hunting was being carried out on certain properties within the Conservancy and Karen hoped to prove to various owners that they would never need to look at hippos on a hunting basis but just to see them purely for tourists to come and see and photograph. Karen’s ongoing Behaviour Study of the hippos has allowed her to be given the title of Hippo expert by various worldwide wildlife organizations. As well, her words and photographs have been published in many magazines and publications around the world. 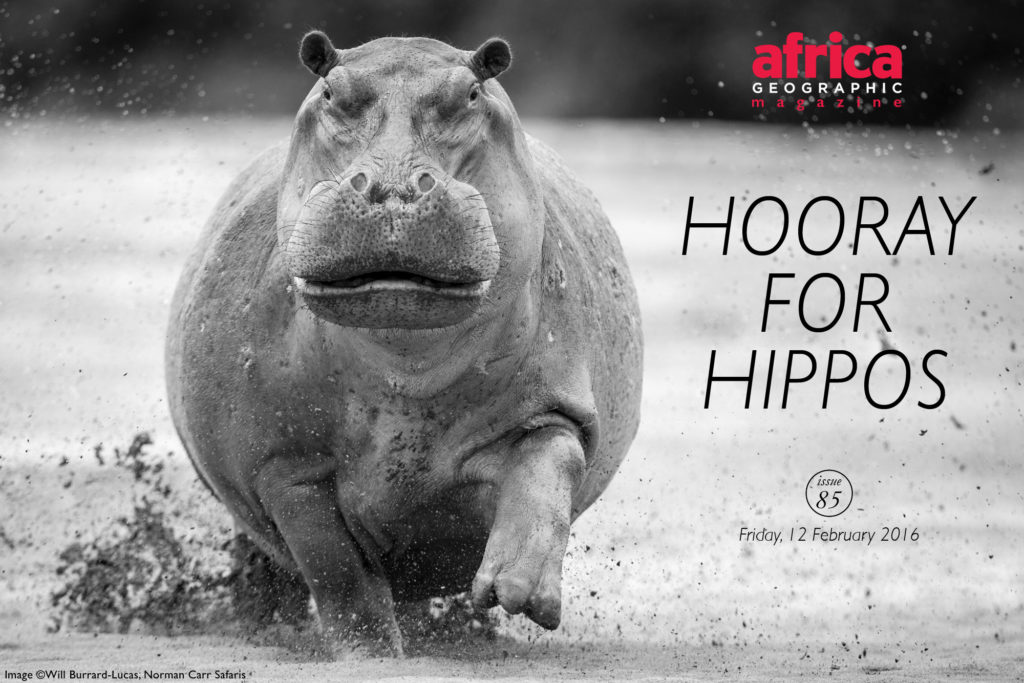 Things were all running smoothly, with over one thousand tourists a year coming from various safari camps in the Conservancy to visit the Trust in order to meet the Turgwe Hippos and witness the incredible bond that had developed over the years between Karen and her hippos. Then all hell broke out in 2000 with political unrest and land invasions brought about by the policies of President Robert Mugabe.

Karen at the time, had just started an education project for local indigenous children. The plan was for them to come along to the hippos, as if on safari, meet them and learn about their own natural heritage. The land invasions put a stop to all educational and building projects. From then on, life for the Paolillos and the hippos became fraught with danger.

This was true to such an extent, that during the bad years from 2001 through to 2007, the hippos and the Paolillos had their lives threatened by so-called war veterans and their minions on many occasions. Rifles aimed at them, bows and arrows pulled on them, and on many occasions mobs at their doorstep.

Poaching became the name of the game throughout Zimbabwe where millions of animals died. Around the hippos’ habitat, almost every single day since 2001 has seen the Paolillos out in the bush, patrolling the areas that the hippos use each night to graze in. They cover around 5000 acres in search of the deadly killing wires that the poachers set to snare an animal. No animal is safe, from an elephant down; all can be caught in these snares, and either killed outright or maimed to die later a slow lingering death.

The Paolillo’s had in  2005 two rangers loaned from the Mokore Safari camp and access to others from Humani, their other neighbour, if ambushes were required to catch poachers. Over the years many have been caught like this. Over 8500 snares have been removed by the Paolillos and the rangers over these past years and many animals released alive from snares. Not one hippo has lost its life through poachers, though other animals have died. Without Jean-Roger and Karen’s daily patrols, not one hippo or any other animal would be alive in this area right now.  Since 2012 the rangers have been complemented by 2 others employed by the Paolillo’s  and all rangers work under the Paolillo’s direction to keep the area secure against snares and poachers.

Zimbabwe appears to have stabilized politically now and so the tourists have begun to return. What they find at the Paolillos becomes, or so they tell them, the highlight of their tour to Zimbabwe. The Paolillos’ home is Haven to any wild animal and a huge troop of wild Chacma Baboons as well as their more dainty cousins the Vervet Monkey are a daily part of the Haven’s life. It is probably the only place in the world where you live with the Baboons. They utilize the home and its surroundings as part of their territory and it is not unusual to find yourself sitting in a chair with several baboons sitting quite naturally right next to you.

Volunteers come along to the Turgwe Hippo Trust from around the world, only four people at a time as they live very much as part of the family with the Paolillos and the animals. Their donations to the Trust help the Paolillos to continue to operate without the one thousand tourists of years gone by. The Trust runs an “adopt a hippo” project and Karen puts up two videos per month on their web site www.savethehippos.com for people to see what life in Africa amongst the animals is all about. She hopes they enjoy them enough to make further donations.

Often during the dry season, the Paolillos can be found in the river, digging sand with shovels alongside their assistant Silas and the rangers. This is done in order to block up some channels so that the water flows to the hippos’ natural pools. If need be, the Trust’s sand pump can be used to remove excess silt and sand that decrease the size and depth of the hippos’ pools.

Since 1992 the Turgwe Hippos owe their lives to the Paolillos and without Karen’s passion for these animals, none would be alive today.