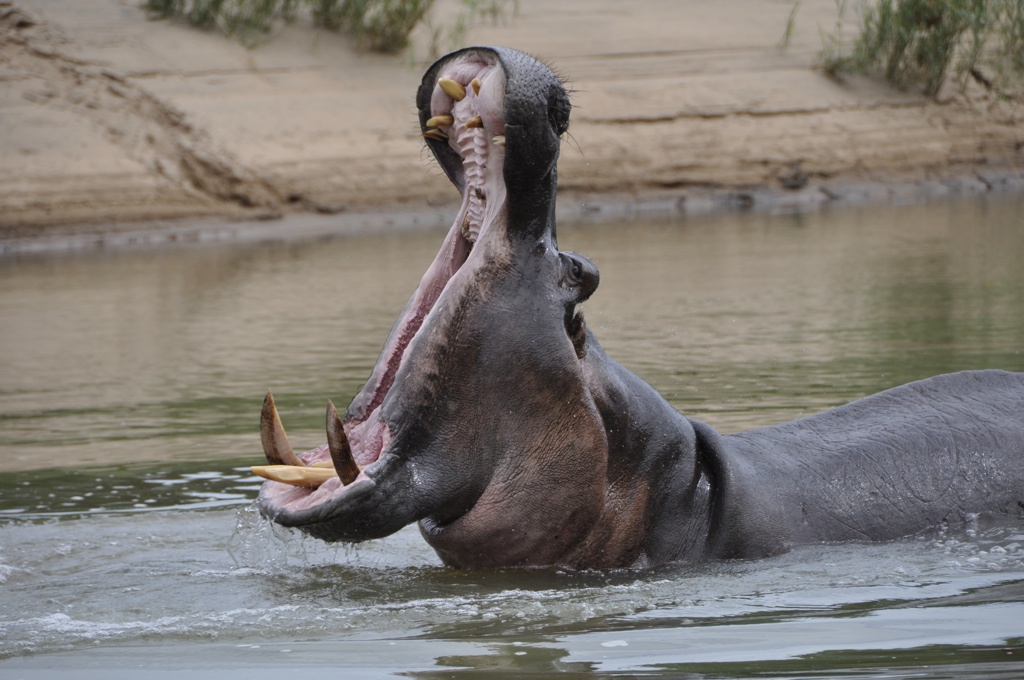 This update for our website is long overdue but with all of this correspondence, I have to be careful that I don’t end up spending more time writing than actually physically being out in the bush with the hippos, and helping them in their daily lives.

Some of you, reading about the Trust for the first time, may ask how people like myself and Jean-Roger help wild animals without interfering in their environment and the natural order of things.
In the case of the hippos it is self explanatory. Had I not have raised the funds and fed in situ these hippos way back in 1992, not one single animal would be alive today. 47 calves have been born from an initial nucleus of only 13 animals. Those 13 hippos were the only ones to survive a horrendous drought, which saw the death of thousands of wild animals. They survived because I fed them in the bush for over ten very long and stressful months. Many other animals ate at the feeding station for the hippos. 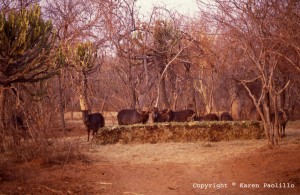 At that time the area was mainly private ranching lands for cattle and the odd safari setup, but we were camped above the riverbank as my husband is a geologist. I could not sit back and watch the hippos and the animals in our area die. So I intervened, saving the last 13 hippos in the Turgwe River. I found 7 carcasses of hippos that had left the river and later starved to death. Other hippos that had lived here disappeared, but the 13 that I gave food and water to, made it. In fact two conceived during the feeding program and one of those calves born in June 1993 is Tembia, the bull up at the Majekwe weir pool. 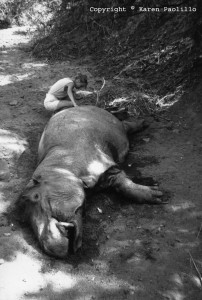 Crooked Tooth, bull who died in the drought and Karen measuring him

Tembia lives with his family of six hippos in the river 3 miles (5 km) upstream from the Turgwe Hippo Trust. His area is heavily poached and is one of the places we concentrate on sending our game scouts and going there ourselves regularly. This is so we can find and remove the snares that the poachers set to kill any animal, which can be from as large as an elephant to a tiny grysbok. 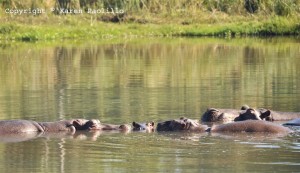 Tembia and some of his family at the Majekwe weir.
Left to right Tsakus and baby Anna, then Ronnie and Tembia at the back

After saving the last hippos’ lives, I formed the Turgwe Hippo Trust, a non-profit organization, and since then so many things have occurred.

2011 was a joyful year for hippo births as a total of 4 calves were born. So far in 2012 two more baby hippos have been born. A young female hippo normally gives birth every three to four years, while an older cow will take a bit longer; sometimes up to five or six years can pass before she has a new baby. We have quite a few young mothers and so calves are being born on average every four years. 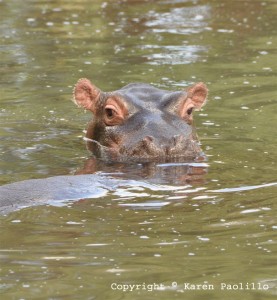 As these hippos are free and wild, they can come and go and often juvenile hippos of both sexes will leave the Turgwe Trust pools and move away to other pools or to two other river systems within this wildlife Conservancy. Although this large area of over 3,200 square kilometers of bush land was designated as a wildlife area back in 1994, we did unfortunately get affected by the political turmoil in Zimbabwe which commenced in 2000. This saw the center, eastern and western boundaries illegally invaded by settlers who in actuality were sent to this wildlife land to poach, and only for that purpose. Then under the guise of land invasions the people killed thousands of wild animals for the bush meat trade. 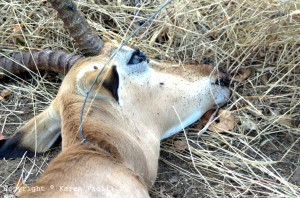 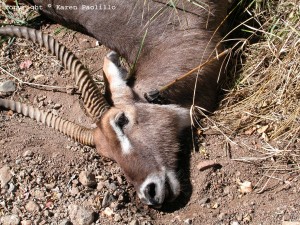 Waterbuck with an arrow stuck in the neck which killed it

Those dreadful years, between 2000 and 2006, found our lives turned upside down. From a peaceful existence with wildlife, doing man-management projects and school education tours, or taking safari tourists to meet the hippos, we found ourselves under the daily pressure of violence, mobs, and intense poaching that happened to anybody living on the land in Zimbabwe during those awful years.

At this moment, thankfully the violence from politically motivated agendas has ceased and all we have to deal with at present is the poaching angle. Plus of course any natural environmental issues. In 2011 between us and the scouts we found over double the usual amount of snares. A hundred percent increase, but at least we know that those 400 odd snares were removed from the bush and destroyed, so they can never kill or maim a wild animal again.

Alongside deaths we were hit by another problem in March 2012. The nearby safari outfit that lends us two game scouts helping us on patrols would not be doing this any longer. They had sent all of their scouts on a training course, including the ones that come to us, as we normally had two, changing every two weeks. At the end of the course they decided that it would be too much hassle to split the trained groups of scouts, so we must find our own scouts.

The reason this was such a hard-hitting event was that, because on our side of the river we have illegal settlers, it is not unusual for the game scouts from across the river (this included the ones that came to us) to get into cahoots with them. Since 2005 when we had the first 2 scouts lent to us after some extreme, politically motivated violence towards us, hardly any of the scouts from that property have remained working there. This is because it is so easy for them to be tempted to poach and be illegal, just like the settlers.

So we used to change the scouts every two weeks to stop them becoming too familiar with the nearby people. Now all this has had to change. We would need to employ at least 4 men, so that 2 could go home monthly on their days off and 2 could work. We would have to hope that the incentives we give, as well as our daily supervision, would keep them from moving into the wrong partnerships with the poachers. 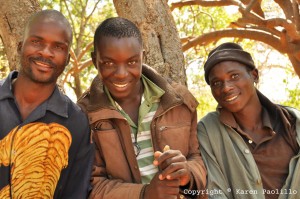 All of this is yet another stress, both mentally and financially upon the Trust. For legal purposes the safari camp has agreed to pay for 2 of these men and have them under their jurisdiction, but the scouts are fully under us for employment. We will have to pay for the remaining two, as well as pay for bonuses, uniforms, etc. The Safari camp will help out with 2 of the men’s uniforms, but will not supply boots.