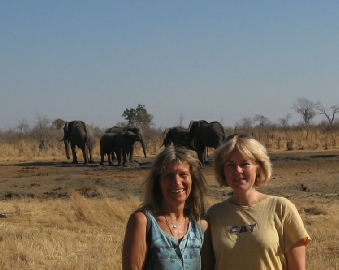 Doug and I have just returned from a very special trip to Zimbabwe to stay with Karen and Jean-Roger Paolillo who run the Turgwe Hippo Trust.

I have been wanting to visit them and the hippos ever since Karen and I first got in touch back in 1991, but, due to one thing and another, we didn’t make it to Zimbabwe until this year. It was a trip worth waiting for and I have come back armed with hundreds of photos and videos ready to make 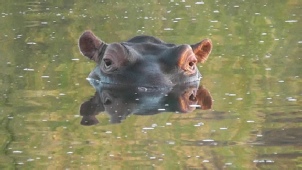 BonBon in the water

lots more new sculptures. I am now inspired to make some new hippos and elephants and, new for me, warthogs and guinea fowl. So watch this space!

Karen and Jean-Roger not only protect the hippos and make sure they are safe from drought, famine and poaching but they also protect the other wild animals living around them by doing daily snare patrols with the four scouts who are employed to help them. They form part of a team with their nearest neighbour (who is 22 km away) to patrol their part of the Savé Conservancy. Staying with them gave us a very close and personal experience of the animals and the land. 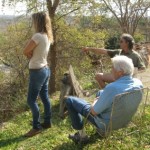 We were able to see both from the “roots up” and not from a tourist bus. Karen and JR live with their cats in a house they built themselves and share the outside with a troop of baboons and vervet monkeys. At first I found the baboons rather daunting. Although I was forewarned that they lived around the house, I had not realised how big they are! But I soon got used to having to ask them to move in order to open the door to get in and out of the house and sitting out on the patio chairs with baboons and monkeys became quite normal. It was amazing to be able to be so close to wild animals, for although Karen and Jean give them titbits they are still wild. I was even lucky enough to be able to stroke Hazel, one of the vervet monkeys who had a favourite perch sitting on a dead tree just outside their double doors. In fact I got so used to them that I forgot what opportunists they are and neglected to guard our lunch when we left for our return drive to Harare. As I walked to the car a baboon appeared from nowhere, our sandwiches were whisked from my arms and the thief vanished around the house with the whole troop running gleefully after him. 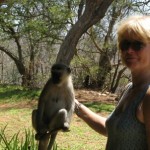 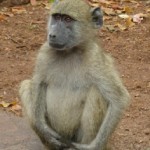 By the time we caught up the sandwiches were ripped to shreds and being scoffed by about twenty very happy baboons. And they look so innocent!

When Karen first came to Zimbabwe she trained to be a fully qualified safari guide (which was rare for a woman then) and so, because of her knowledge, was able to take us safely around the bush and get us close the animals and in particular her hippos. I was honoured to be able to stand very close to one of her hippos (Surprise) whilst she was lying on the river bank. Karen told me that no one had been as close before except for her! 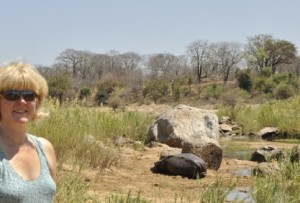 Not only did we get close to the hippos but also to several herds of elephants. Karen’s friend Sharon Pincott who looks after the President’s Elephants in Hwange also gave us a very special and memorable couple of days. Sharon is familiar to the elephants she protects and as a result they will come right up to her jeep. These are wild elephants and it is they that choose whether to approach or not. There is, of course, no guarantee that you will find them, but we were lucky enough to meet first of all Joyce and her two daughters. Joyce came right up to the jeep and it was so hard to not reach out and stroke her. But we had to remember she is wild and you have to respect her space. It was so amazing that I cannot adequately describe how I felt. Awestruck I think. We then went on and came across the “L” family, a herd of twenty that had with them a couple of very large bull elephants and a very new calf. They too came up to see us when Sharon called them over. In amongst them were Lucky and Libby. Sharon’s favourite, Lady, was sadly not there. She is the matriarch of the herd and Sharon has now not seen her for nearly a year and so is naturally becoming concerned for her welfare. We all hope and pray she is back soon. Our encounter with the “L” family was fantastic. 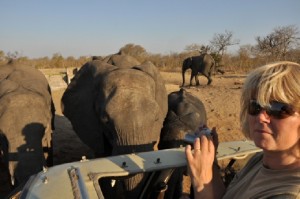 Me and the “L” family of presidential heird. 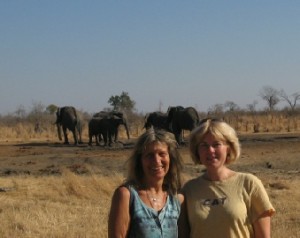 me and Karen at Ganda lodge with the heird

They all crowded around us and almost took my camera away. Had they wanted to they could have flipped the jeep over with just a nudge, but they were calm and relaxed, even the great bulls who were not known to Sharon were placid as they towered over us. Libby was feeling mischievous and at one stage put a dent in the jeep’s bonnet with her trunk, but at no time did we feel threatened.

 My treats with elephants were not over yet. The next day Karen and Sharon took us into Hwange National Park where we enjoyed watching elephants wallowing in water and playing and then also seeing giraffe, zebra, kudu, water buck, impala, an ostrich family with 15 chicks in tow, warthogs and sable all coming to the pan to drink while a couple of hippos and a crocodile slept soundly in the water. 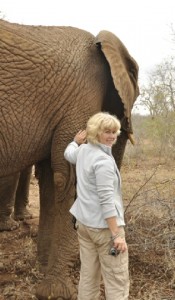 And still there was more to come. Another of Karen’s friends has four elephant orphans that she has looked after in a semi-wild state. With Theresa you can walk in the bush with the elephants and even touch them. They are not elephants that have been broken by humans in order for you to be able to ride them. Instead they have been loved and cared for and left to be as natural as they can be within the confines of the land that Theresa and her husband are still fighting to hang on to. Whilst their farm is surrounded by settlers and poachers she cannot risk letting the elephants go off to find a wild herd. So every day her helpers walk with them protecting them from snares and poachers and then bring them back to the farm for safety at night. We walked with and touched these elephants. Again I cannot describe how special this was. Their skin was like a dried up river bed with great crevasses and yet in a very strange way seemed soft. For me the ultimate time came when the eldest elephant called “Chitora” who is 14 years old, reached out with her trunk and took my hand. She was so gentle and yet I could feel her strength. This encounter was magical and one I will never forget. I could have stayed all day just being with these elephants. 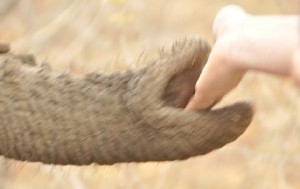 And then back to Karen and Jean-Roger’s house on the Turgwe River. Now our holiday seemed to be suddenly running out of time and I hadn’t seen nearly enough of the hippos. But I was to be spoilt some more. At the time of year we were there it was very unusual for see hippos on land because of the heat, but on the morning before we had to leave for Harare, there they were, five of them, on the sand by the river. Following Karen as quietly as I could we climbed onto a small rock to watch them. As we watched, Tasha also came out to of the water to join the others, the two bulls Robin and Kuchek being the only two left in the water. Little BonBon at last threw off her shyness and wandered about for me and then cuddled up to her mother. Cheeky the matriarch at one stage stood up warily at the sound of some baboons and we thought they would all rush back to the water, but she decided that all was okay and just settled back down. After about an hour or so Cheeky finally decided she was too hot and ambled back to the water slowly followed by the others except for Surprise who slept on. Karen talked to the hippos as we moved down from our boulder on to the sand only about 30  yards away from Surprise. Another special moment, to be that close to a wild, but very relaxed hippo. I was very honoured. The rest of the pod looked on from the water in between bobbing under, gapeing and chattering. In the meantime Maxi, Surprise’s calf, hung back near her but still in the water. Finally Surprise decided to join the others and little Maxi rushed to her with joy and they rubbed noses.

On our last day we went in search of Tandee, another of our foster hippos, who lives in a different part of the river. To get to her would mean crossing through reeds five foot high. I have to admit I was slightly nervous about doing this, but when we got there we found that we couldn’t chance it as there, on the other side of the river, were three very large bull elephants. So no Tandee, but a last sight of elephants before our very long journey home.
Our trip was certainly very special. We may not have seen any big cats, but we had an unforgettable time with hippos and elephants. And I am not sorry we didn’t see everything as it gives me a good excuse (as if I really need one) to go back!

Suzie is our talented friend who crafts beautiful hippo sculptures available for purchase. Visit her website or our Merchandise page.