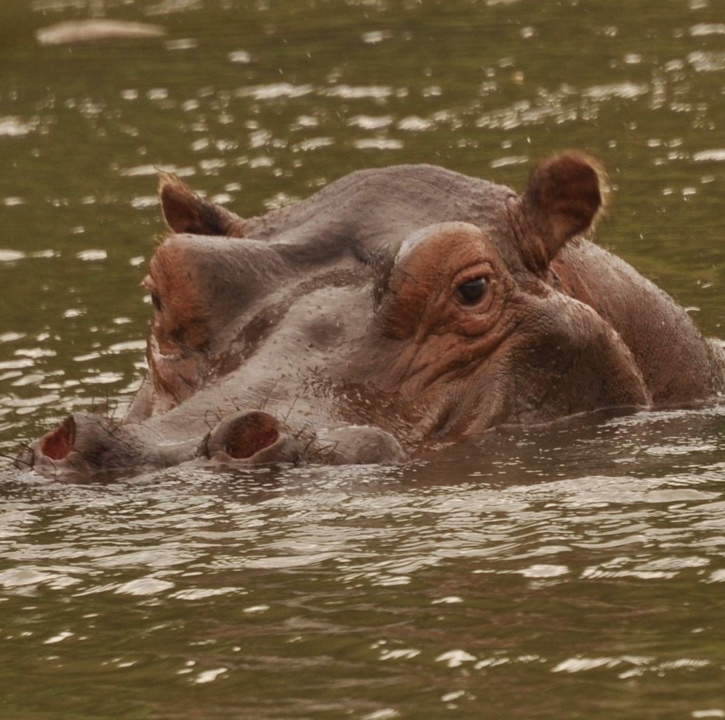 I end this year on a very sad note, hoping that we will move forward into a happier and better new year.

A very special female hippo, Surprise, was found dead on December 23rd but I have only written this blog now as I wanted to notify her supporters before letting everyone know that she has died.

Surprise was special because she was conceived at the end of the 1992 drought and was born on the 3rd of November 1993 just after I had fed all these hippos for the very first time, keeping them alive during the first really severe drought. Her mother is Abe and her father was my special hippo bull Bob, who died in 2003.

From the day she was born she was so recognizable, with a sunken type back bone and her large frame with a wrinkled appearance like most of Abe’s offspring. She also had a lovely temperament, which only changed later in life and I think I know why that happened. I will explain that a bit later.

Having known her for 25 years from the day she was born, I had watched her give birth to five daughters and two sons: Kubi, Sabi, Kiboko and Maxie her daughters, along with Chubby and Shama her sons. Not one of her offspring remained living in the Turgwe River; all moved away, with only Chubby staying 14 kilometers downstream at a pool called the Drift, but even he of late has not been in that area.

Surprise does have family members staying in the Turgwe River. She actually lived with her one sister Tacha and Kuchek the bull and his family, while her other sisters Tsakus, Odile and Grace live up with Tembia the other bull in the Turgwe River, some 4 kilometers from Hippo Haven.

Surprise always allowed me close contact when she gave birth to her calves, and was not at all afraid of me. During the 2016 drought she often came to the food alone and initially was eating away from the main family near the Gwezi River junction with the Turgwe. I was happy to be able to get her home again as she was very close to a sport hunting camp. Unbeknown to me Surprise at that time was carrying a .357” bullet in her nose just down from her eye. Fortunately it had lodged itself into the porous bone of her nose, and although it must have caused her intense irritation and probably pain at times it had not killed her.

When we found her dead, her head had been separated from her carcass as vultures and predators, including crocodiles, had eaten all of her remains, apart from the skeleton. We found most of her bones, but could not find some of her teeth from the skull nor one front leg and foot bone.

She had died on land about 100 meters from the pool she normally stayed in with her young son Shama as well as Kuchek and family. This in itself was unusual, as all hippos that have died since I started living with them and studying them in the last 28 years, have always returned to the water to die. If they have been killed naturally it is normally loss of blood that kills them, and they always return to the water. In Surprise’s case she was only a few meters from a channel of the river, but she had not got to it. Instead she had died on land, where we found her, and very quickly as she had not moved around or scuffed up the ground in a struggle. We found immediately in the skull a flat-topped .357 slug and from all the information gleaned around and people asked, it is very likely to been fired by a hand gun!!! We know of sport hunters that use hand guns to show their prowess in killing an animal, as with a large and powerful enough bullet they still can kill a large animal; they just have to get in closer. So back in the early to mid-2000s, we believe she had been shot at by a sport hunter. For a poacher to have such a weapon would be very unusual. She lived with that bullet in her nose but at times it obviously caused her discomfort as her temperament changed slightly and she would occasionally, if confronted, do a mock charge. When I fed her in 2016 she charged out of the river once at me, but it was mainly just to warn me to push off so she could come and eat the food we were laying down for her. At no time did I ever feel she was dangerous. I just behaved with her as I would any hippo and gave her the respect that they are entitled to. I also always made sure if she was on land, that there was a nearby tree to climb.

You do not need to shoot at a wild animal in defense; it is much more sensible to remove yourself from their immediate vicinity and with a hippo it is easy you just climb up a tree or a rock and you are OK.

We are still investigating what killed Surprise now, but I do not believe it was a natural death. From information we have received it looks highly unlikely. Her death has not just meant the death of a breeding female hippo, as being only 25 years old she could have had at least another 4 calves, but she has a son. He is not yet one year of age. He turns a year in January and we have not yet located him. I last saw the two of them together on November 3rd (Surprise’s birthday); then on November 11th Shama, her young son, was with Kuchek and the others but there was no sign of Surprise.

This was unusual but as Surprise was never a favorite with any of Kuchek’s family and kept herself much to herself, except at times lying on land with BonBon the younger female, I was not that worried. At that time I had Joe baboon very ill and so I was not going to the hippos every day like I normally do. My attention was all on Joe to try and help him to get better. The times I did go to Kuchek’s family Surprise and Shama were never there, but I did not have time to search the river in the usual places and I just felt she had moved her son away, because Tacha and Relief both have older male calves and might attack Shama.

We were told that a hippo was dead and when we sent our head game scout into that area he came back carrying Surprise’s skull as he too had seen the bullet in the nose. We know that it is an old wound as the bone has grown around the bullet; we managed to get a metal detector to go over the rest of her carcass yesterday but found nothing. This could mean that the bullet that killed her exited her body, or a predator ate the body area with the bullet. We may never know. As soon as our investigations are over and if we get some conclusive evidence I will let everyone know.

What is important now is that we find her son. We use a pendulum which tells us he is very much alive but the question is where. The floods are imminent as we have had a little bit of rain but not much yet. Once the river is in full flood from heavy rains, the hippos move to smaller tributaries and this is when Shama must have other hippos to take care of him. He is too young to be alone during that period. I have to hope with every ounce of my body that he is with others, or near to other hippos to learn from, on how to survive in the wild. He is too old to capture and try and hand feed but too young to be on his own, so I ask you all to hold him in your prayers and thoughts and keep his spirit going and that somehow against so many odds he will be fine. We must not let what has happened to Surprise be a repeat of what happened to Blackface back in 2007 when she was shot and killed, and her own son Five was without her protection and was killed by another hippo. I hope with all my heart that Shama, somehow, will be OK.

I thank Surprise for having shown me how one can live with wild hippos and not be in any way in danger from close proximity with them. How you can step into any wild animal’s life if you take the time, have respect and allow them their personal space. If it is indeed man that has ended Surprise’s life, we hope there will be justice. If it was a natural death, we will find that out too and then put our suspicions to rest. 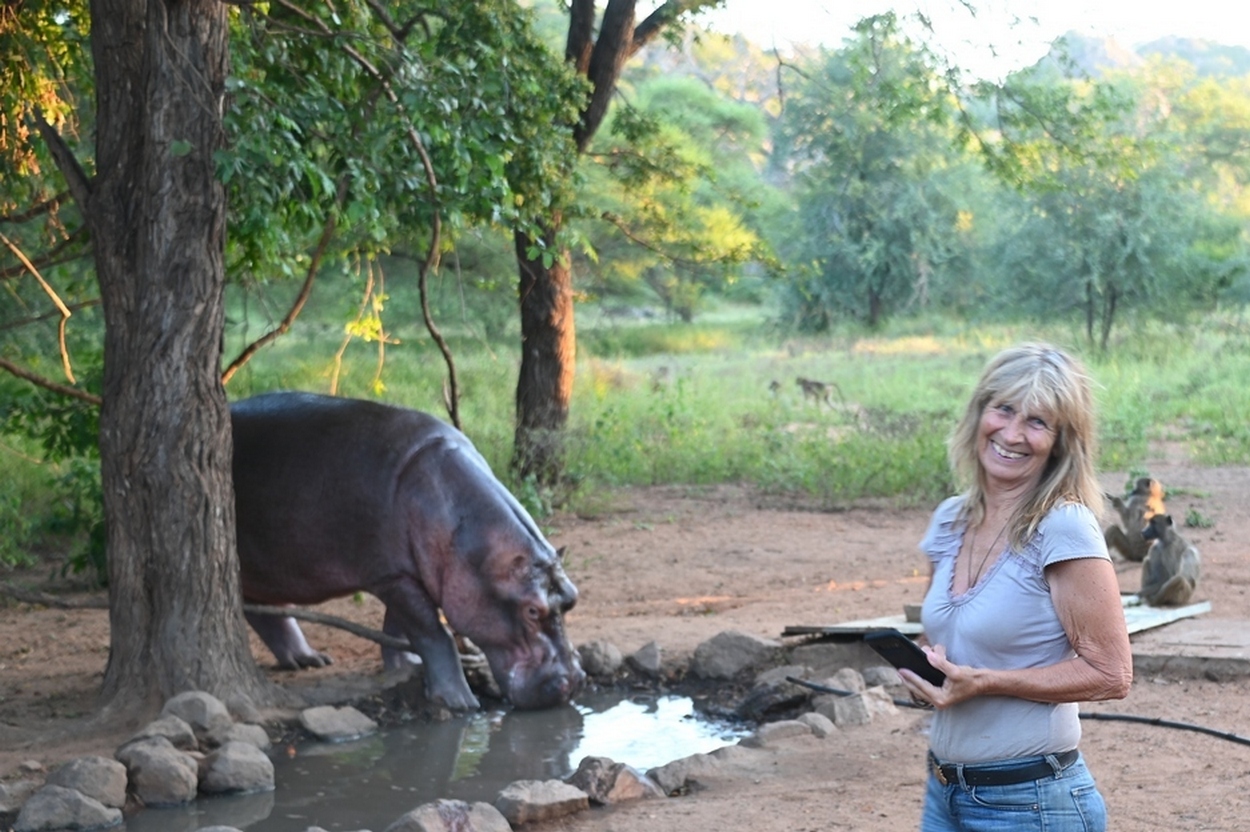