This post was first published on the site of our good friends Discover Wildlife, still available at www.discoverwildlife.com/animals/hippo-whisperer 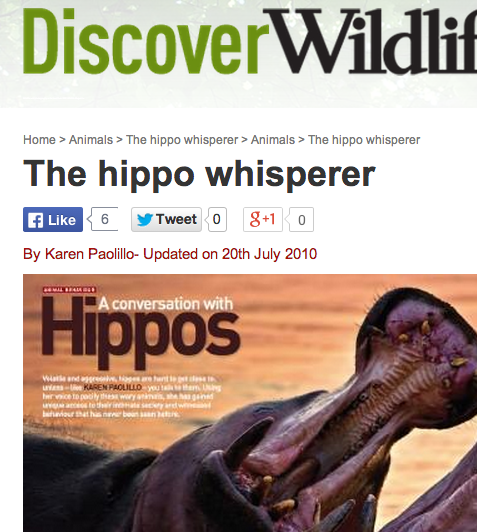 Volatile and aggressive, hippos are hard to get close to, unless – like Karen Paolillo – you talk to them.
Using her voice to pacify these wary animals, she has gained unique access to their intimate society and witnessed behaviour never seen before.
Hippos are said to be the most dangerous large animals in Africa. Though herbivorous, they can inflict deadly wounds with their formidable lower canines. And they don’t take kindly to intruders in their waters. So, to study a pod living on Zimbabwe’s River Turgwe, I had to become a ‘river horse whisperer’.

Hippos are very social and vocal animals, and I found that talking in an endless monologue enabled me to observe them closely without disturbing them. I could sit just metres from a wallowing herd, yet the hippos would ignore me, continuing to roll, play, groom and even mate. But if I paused for breath, they immediately became wary and abandoned what they were doing.

Up close and personal

I’ve studied hippos for 17 years, and during this time I’ve witnessed some extraordinary behaviour.

One winter afternoon, I watched Sabi, a young calf, approach one of the Nile crocodiles basking in the sun. I assumed that, as usual, she would nudge the reptile out of the way and claim its sunbathing spot. But instead she began licking the crocodile’s spiky hindquarters and tail, her drool dribbling down its flanks. I couldn’t believe my eyes.

While it’s extremely rare to see hippos grooming predators, they frequently lick fellow pod members, particularly around the rear. I believe this is a cleaning response, and that the scent of dung on the animals’ skin stimulates their fellow hippos to groom them.

Males in particular spray their dung sideways, flicking their tails to spread the mess around. If a crocodile gets in the way – which is almost unavoidable when living in such close quarters – it may end up spattered. I think that this is what stimulated Sabi to lick her croc.

Hippos fearlessly defend their families and their territories, but, remarkably, they also intervene on behalf of other animals.

One day, I saw a crocodile grab a dainty bushbuck doe as she drank from the river. The croc dragged the doe underwater, resurfacing minutes later with her lifeless corpse in its jaws. But before he could consume his prize, Cheeky, a juvenile female hippo, raced over and wrestled the bushbuck’s body from its captor. A tug-of-war ensued but eventually the reptile reclaimed the carcass and swam off.

Since then, I have seen hippos intervene in crocodile hunts several times, often saving the life of the victim. I recently witnessed a croc launch itself at a young monkey that was dangling from vegetation to feed, missing it by millimetres. Seconds later, two hippos charged the crocodile, forcing it to beat a hasty retreat.

My only explanation for this unusual behaviour is pure curiosity – hippos appear to know the river and have to investigate anything unusual. And perhaps they consider themselves the guardians of the River Turgwe.

Talking your way out of trouble

I, too, am an object of the Turgwe hippos’ curiosity, but a recent event made me feel that the pod may finally have come to accept me.

I was talking to my study family as they slept in the shallows. Suddenly, the grass rustled behind me. I turned to see the pod’s two tonne dominant bull just a couple of metres away, staring at me. He had charged me several times before, leaving me stranded in trees.

Fearing for my life, I leapt into the river, but submerged rocks snagged me and I floundered. Glancing up, I saw to my astonishment that the bull hadn’t budged. He stood, watching me, but showing no sign of his usual malice. Then, he entered the river at the exact spot I had just vacated, so close that I could see every hair on his hide and smell his horse-like stench.

Quietly, he rejoined his family and I realised that my years of talking to these extraordinary hippos had probably just saved my life.