The Turgwe Hippo Trust is having another raffle, this time for you to enter and have the chance of naming a new baby hippo.  The calf is the son or daughter of Relief and I believe Kuchek the young male is a first time father. 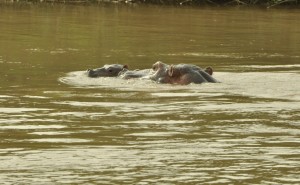 The calf was born either the last few days of January or the first days of February. The calf’s tracks were found by the game scouts on Feb 11th and I last saw Relief on January 21st without a baby.  So I will record the birth as 1st February. 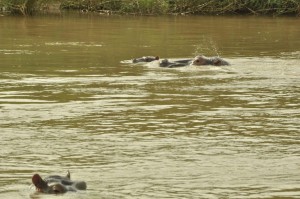 Calf at the back, with mother Relief. Maxie in front.

I have not managed to get very close to the baby as Relief like many mothers is keeping her distance from humans and other hippos but she has rejoined the family now and Kuchek seems very interested in the new baby. I am sure he is the father as I have never had a bull mate his own daughter and Relief is the daughter of Robin. 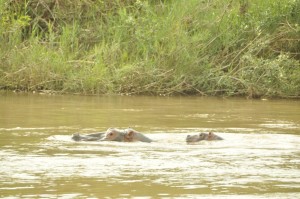 Kuchek was born in March 2001 and this is his first offspring. 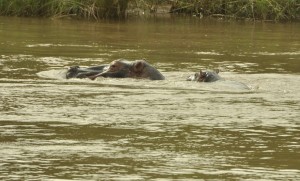 It is a plucky little calf and has managed to go through several floods of the river by accompanying Relief to smaller rivers that normally only have water in when the Turgwe is in flood.

Baby resting on mother in the river

To enter the raffle select one the raffle ticket below, either $80, GBP 50 or 60 € and then email me with your name and the name proposed for the baby. 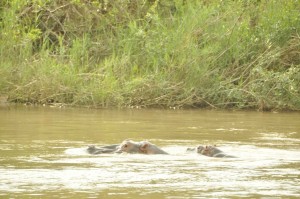 This calf needs a name !

The raffle will be drawn on Monday 31st March and I will notify the winner by email and on Facebook and twitter.

Raffle has a winner : Anita Merritt from Canada

Love Karen and all the hippos