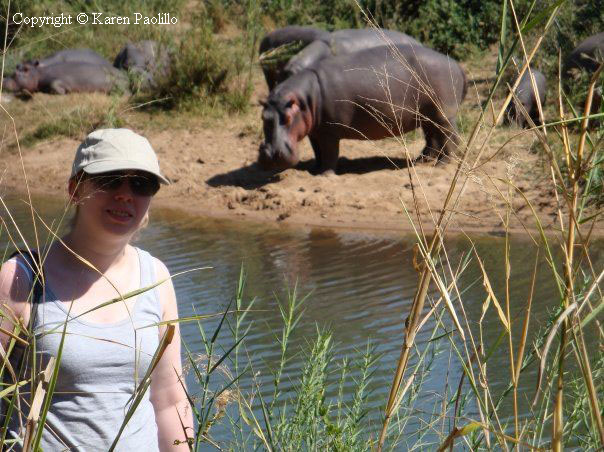 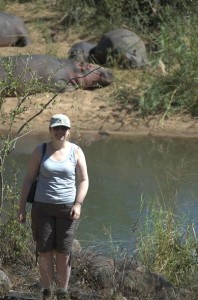 Kirsty along the Turgwe with hippos

I’ve been obsessed with hippos since I was a child. For my 21st birthday I asked to have an adopted hippo. My mum researched this on the internet and found various zoo options, which just put your name on a plaque and give you free entry to the zoo, but then came across The Turgwe Hippo Trust, an organisation really making a difference where it is needed. She chose Cheeky for me as she liked the name and also thought it possible that she might have a calf during my adoption. During that year we learnt so much about what Karen and Jean-Roger Paolillo are doing that we wanted to stick with it. So I am still Cheeky’s foster parent after seven years – a really good deal as Mum still pays for it.

When Karen came over to England in 2005 to do some talks we were lucky enough to meet her. My younger sister Hazel was only twelve years old then but it inspired her so much that she only ever talked about going to Africa to help the animals. Now she is sixteen, Karen agreed to her coming to stay with them to do some voluntary work. Mum asked me to fly out with her as she was rather young to approach such an adventure on her own and also so that I could visit my hippo. I didn’t need to think about it – I was busy organising jabs and packing my bags. I couldn’t believe I was actually going. It all happened very quickly as I already had leave booked and couldn’t change it. A month later we were off.

After a long journey Karen and Jean-Roger met us in Harare. Unfortunately there was no sign of our luggage. Karen had warned us that this was a possibility so we had a change of clothes in our hand luggage. We arranged for someone to collect our bags when they arrived and then we set off on the long drive to Hippo Haven. Nearly six hours later we entered the Conservancy. As we drove along we saw impala and giraffes. We stopped briefly to take photos but had to move on in order to arrive before dark. Our first evening was just spent eating, emailing Mum to say we had arrived and generally being exhausted. 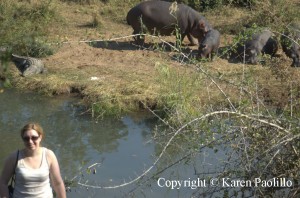 Kirsty and her adopted hippo : Cheeky

The following morning I woke up to baboons using the asbestos roof of the cottage as a trampoline and chattering away loudly. We were staying in the cottage next to the main house. The windows are just wire mesh and the bathroom has one mesh wall so you can see the view from the loo! Taking a shower is interesting. It can be quite an adventure with baboons jumping on the roof and watching through the mesh. Hazel shared one of her showers with a gecko.

Once we were up we were taken to be introduced to the baboons who all have names. Now it was time to see the hippos. It was a short walk past our cottage and down the hill to the river. As we walked we saw hippo tracks and dung and signs of other animals. We saw a couple of hippos leaving the river and heading off inland and as we got to the river the first thing we saw was a crocodile on the sand bank who moved back into the river. They do this with strangers and probably hope you will fall in. They stop doing this when they are more used to you and realise that lunch is not an option.

At the side of the river are some old girders from a water pump or something that is long gone. We sat on this and from here could see hippos peeking out of the water. While we watched a few more surfaced, one of which was Cheeky. Karen spoke to the hippos and they stayed and watched us, occasionally going under the water. They respond to her voice and stay calm, understanding that there is no threat.

We turned as we heard a noise. Another hippo was just entering the water behind us. It sat underwater by some reeds for a while and then moved over to join the main group. Nearly all the hippos were together now and we watched a couple gaping and one rested its head on another’s back. Karen was just saying how we would come back later to see them out of the water when Blackface and Five got up to leave the river. It was as if they knew. As we watched the others gradually followed. Cheeky was one of the last to leave, closely followed by her adorable baby Peaches. We watched till they wandered off inland and then went back for breakfast. After breakfast Karen took us for a walk to show us the local area including one of the cemented pans that they have built. We headed back to get out of the heat before lunchtime when it gets very hot. Back at the Haven we fed oranges to Vervet monkeys. They are very good at catching and some of them will take it from your hand. 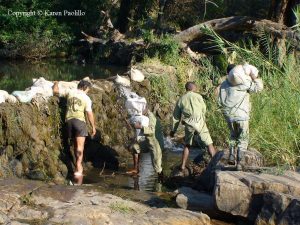 JR and the scouts fixing the weir

Later that afternoon I went on snare patrol with Jean-Roger through trees and up a rock kopje. Although we didn’t go right to the top we were quite high and had a lovely view across the trees over the Turgwe River to the mountains in the distance. We didn’t find any snares which meant the poachers had not been recently. Back at Hippo Haven, Hazel saw a baboon outside that had stolen her pillow, which had been put out to air. We ran out but it jumped onto the roof. I called Karen and as she came out the baboon ran off leaving the pillow on the roof. Jean-Roger had to get it down with a broom. They will steal anything that is lying around and don’t normally let it go again so we were lucky.

During the night I heard hippos. They sounded close by. In the morning I asked Karen about this. She said they had come up to behind the water tanks which are very near to our cottage. There is no window or mesh on that side so we wouldn’t have seen them.

Today we had to go down to the river, near where the hippos are. There is a weir that needed building up to make the water deeper. First we had to fill the sacks taking turns to shovel sand and hold the sack open. Then Silas took them from us and tied them up. Silas and the game scouts, Freddie and Innocent, carried them over to Jean-Roger who placed them along the lowest parts of the weir. When all the sacks were filled we came back for breakfast and monkey feeding. The next job was at a channel upstream where we had to dig the sand from the bottom of the river and build a barrier to make sure all the water went down to the pool where the hippos are. We did this in two places. It was lovely and cool standing in the water. I walked in an elephant’s footprint next to the river. It was a lot bigger than my foot! 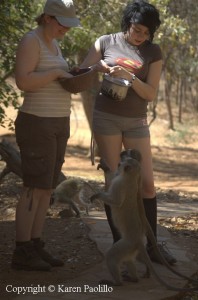 Kirsty and Hazel feeding the vervets

That afternoon we went on patrol with the game scouts. We spread out in a line to cover more ground, looking for snares. Walking through grass is quite different than at home. It is long and coarse and there are a lot of spiky plants and small bushes that cover you in scratches. By the time I got home you could play noughts and crosses on my leg. Again we didn’t find any snares, which was good. We saw kudu and waterbuck by the river. Everywhere there are lots of monkeys and baboons. Back by the hippos we watched them from above. Sometimes all you could see were their nostrils. We saw a crocodile trying to mate. When they do this they climb up on the other croc in the water. The female wasn’t interested so it was a very short moment! We passed the place where we had laid the sand bags that morning. The water had risen considerably after digging upstream. The sun was beginning to set so we had to head back as it gets dark very quickly.

Next day we visited the hippos early to try and get photos of them gaping but no luck. We came back for breakfast and monkey feeding and then did our photo shoot for the website and the new t-shirts and bag.

Now it was time for a serious elephant search. We went down the hill and across the hippo island to the other side. We came near some impala going to the river to drink. We waited till they finished so as not to scare them off. They are very nervous and if we had scared them they would not have had a drink for hours, not a good thing in the heat. We walked quite a bit further but as it was getting hotter and nearly lunch time we decided to head back. It was then that we saw elephants. They were over in the hippos’ island and must have crossed behind us. We would have only just missed them on the way out. We walked along further to get a better view. There was a baby one and a big bull in amongst them. Karen counted about twenty of them heading through the trees. On the way back we heard a tree cracking and an elephant trumpet but we didn’t see them again. I then packed my bag as I was leaving early in the morning. 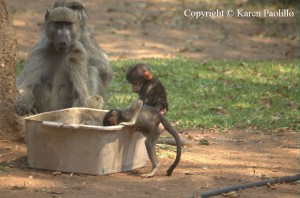 About 4 pm we set off for my final visit to the hippos. They were all in the water by this time. Karen wanted a photo of me with Cheeky. She told me to stand on the bank near the water but we only had time to take one photo as Blackface obviously thought I was too close and came to scare me off. I couldn’t see this but Karen told me to walk off quickly. Nearly nibbled by a hippo on my last day! I did finally manage to get photos of the hippos gaping, three at the same time in one of them. Back at the house we took photos with Silas, Karen and Jean-Roger’s main assistant, and the baboons.

I wish I could have stayed longer. It is a fantastic place. Karen and Jean-Roger work so hard. No-one round there understands why they do it. Most people in that area are involved in the hunting business. The hunters don’t like the poachers and are grateful to Karen and Jean-Roger for that but they don’t understand the love for the hippos or the feeding of the monkeys. Monkeys and baboons are seen as pests by some, much like rabbits are here.

I can’t thank Karen and Jean-Roger enough for the fantastic experience I had. I hope to go back again someday.