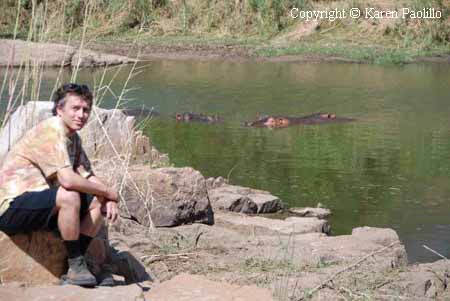 I’d  listened to Karen’s lectures, read her newsletters, looked at the photographs and watched the DVD, but none of this had really prepared me for the feelings of sheer wonder that I felt when I first set eyes on a group of hippos lying nonchalantly in the Mokore Pool. It is early morning; the water is still; the temperature is rising; the only sound a cacophony of noise coming from a group of baboons swinging in the trees behind us (attention seekers). It is an idyllic place. At first it looks like there are six hippos in the water, but suddenly a small head breaks the surface; then another and a few seconds later a ninth – we were expecting nine and nine there are. Karen slowly walks towards them along the bank, addressing them by name, individually. They look at her; they are relaxed. She bids me come closer, but slowly as they will be aware of my presence and I am a visitor to their home. They are nervous of strangers and may react. They don’t. So we move a little closer, always slowly and quietly. Now we are sitting comfortably on a small rock promontory, just 10 metres or so away from the hippos. 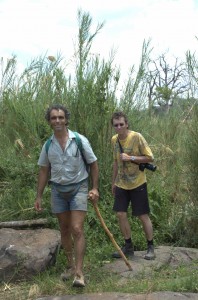 Jean and Cary Martin during a walk

The three younger hippos – Dizzy, Kiboko and Tandee – are constantly on the move, disappearing under the water, climbing on top of each other (just like any youngsters), but always staying close to their mothers. Robin, the paterfamilias, drowses contentedly, but watchfully. Every few minutes he lifts one eyelid to check that we are behaving. We are, so he closes it again and returns to his slumber. Kuchek, the hippo I sponsor, is by his mother – Mystery – and younger brother – Dizzy. He has not moved since we arrived, so Karen calls to him to introduce me. Now he responds, he looks towards us and slowly changes position so that we can see him more clearly. Obviously not camera-shy.

We stayed by the Pool for two hours. It is an enchanted spot. So picturesque. On different days we visited the two other locations where the hippos are currently resident. But while the hippos were the main attraction – obviously – there is just so much more. We first heard and then watched a herd of elephants pass along the Turgwe river bed that meanders in front of Karen and Jean’s house. It is an extraordinary experience. First you hear them and then you wait, eyes focused on the bush below. You hear them again; they are coming closer. And then you see them, slowly making their way along the side of the river, which is now very low as the rains have not yet arrived. The nearest human neighbours are 16 kilometres or so away, but our closest ancestors are literally on the door-step.

Sixty baboons and vervet monkeys have taken up residence next door. The monkeys had just bred and the mothers were running around with their suckling babies tightly holding on to their tummies. They regularly approached us for food and many of them would gently take the bread or nuts directly from our hands. Sitting on the veranda outside the house, with a vervet and her baby at my side (or in one case on my shoulder), is an experience I will treasure for life. And they are so individual. So thank you Spassy, Sid and Vixen (the baboons) and Greedy (no guesses as to how he got his name), Biscuit, Cheeky, Pretty Lady, China Blue, Dragon Lady, Hands and Old Lady (the vervet monkeys) for making my stay so memorable (and apologies to all those not mentioned by name).

Cary close to the hippos on the river bank

Visiting Karen and Jean at the Turgwe Hippo Trust is an unforgettable adventure. The location is just stunning; the proximity to the animals exhilarating. Equally the hardships that they are facing daily are for real. Life in Zimbabwe is as difficult as the news media report. The supermarkets are empty. You do have to drive to South Africa to buy food. Petrol is hard to obtain. The poachers are a constant menace for the animals. But Karen and Jean are battling through. They are managing, but it is tough, really tough. On the other hand, it is not a dangerous place to be. The people are friendly; they like visitors and tourists (they only wish there were more of them!). It is a safe country to be in. I went to Victoria Falls and also spent a night in Harare on my own and felt totally at ease. And the animals are something else – the hippos, Jimmy the black rhino (orphaned at a few weeks and now being nursed by a neighbour), the elephants, the baboons and monkeys and all the others – it is a very special place. I was very fortunate.