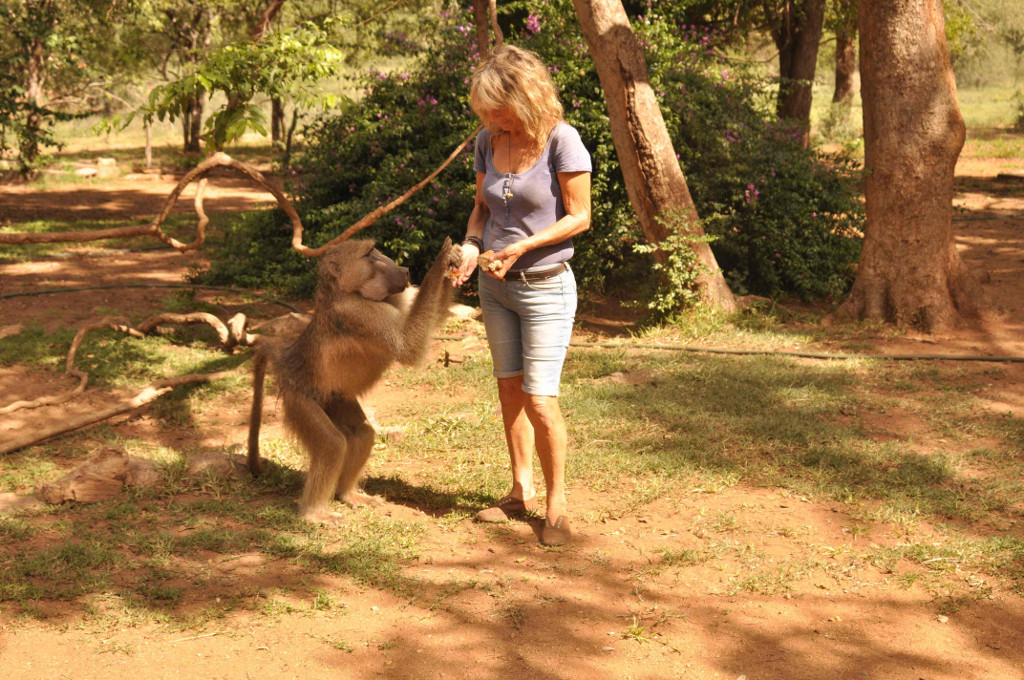 With the agreement of Laura Simpson (the author of the lines below), here is a reprint of a wonderful post published by Care2 on their blog.

Visit our friends at

We already knew Karen has a passion for hippos but reality is even greater because her passion is spread to all wild animals.

Here is the story of Yogi.

Yogi the wild baboon was in grave danger from a snare around his waist that was slowly strangling him. He cradled a baby baboon in his lap with the hope that it would protect him from the other males who would soon try to tear him apart, but Yogi’s only real hope was at the hands of three powerful women who refused to fail him.

Yogi had unfortunately been caught in a poachers’ snare which typically traps wildlife until the men return to kill the animal. However, Yogi pulled the snare loose from its anchor and was spotted by Karen Paolillo who is guardian to the wild things here at Hippo Haven in Zimbabwe. 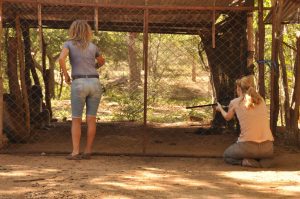 “The noose is tightly wrapped around his hindquarter area,” Karen explained days ago. “The wire is trailing slightly on one side.”

Karen’s first course of action was to put food out for Yogi, and to lace it with sedatives. 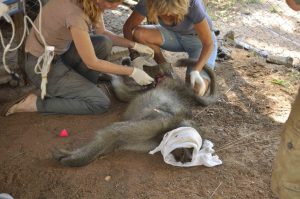 “You cannot handle a large male baboon however calm he is,” Karen said. “They have been known to attack leopards and their teeth are not to be played with. And, he can’t be with the others, as baboons will attack if you handle one of their own kind and they think you are hurting it.” 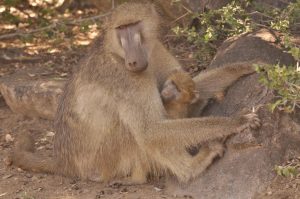 So the next day, Karen set her plan into motion.

“He arrived at 11.30 a.m. today but the whole troop, including two dominant males, were here as well,” a sleepless Karen reported. “I managed to get him some food in the garage and he ate while I guarded him but then the others got a bit keen to push him away so I backed off. Last night, lying awake in bed, I realized that if we just gave him the food with drug in, it takes around 30 minutes for him to go down and in that time he could have an accident. He could wonder off and fall in the river. Apart from drowning there are crocodiles or he could climb a high tree fall off.”

So, Karen decided at about 1 a.m. that the best thing would be to entice Yogi into her fenced garage and then close the gate behind him and then have a wildlife veterinarian use a blow dart to sedate him. Only problem was that when he arrived that morning, the entire troop of about 50 baboons was with him. So Karen enlisted help; her husband Jean-Roger kept them busy with treats while Karen lured Yogi into the garage.

“I stationed the three game scouts around the garage to keep the main troop from hassling Yogi and upsetting him,” Karen explained. “Jean-Roger radioed Dr Rosemary Groom and she and her colleague Jess Watermeyer were soon on their way. As we waited, Yogi got a bit peeved when the main troop started moving off and he started hitting the ground with his front feet but I talked to him and he calmed down. He tried a few times to pull at the wire, but again soft words calmed him.” 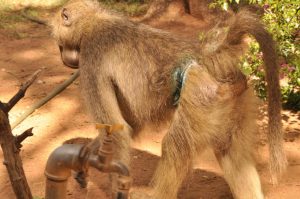 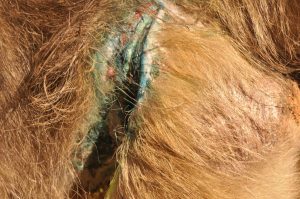 “Rosemary and Jess got all the darting equipment and medicines ready and while a cameraman, Neil, who is making a film about them, filmed it all. Rosemary got into position. She fired the gun. A great shot, perfect place. Within 10 minutes, he was down. We then proceeded to cut the wire out, clean the wound, Rosemary gave Yogi an antibiotic injection. All the time Jess kept watch over his breathing and pulse. Then when all was finished Jess gave him a shot of the reversal drug which brings him around. I then left him until 1:30 p.m. in the garage with the scouts keeping watch so that he could recover and not be in anyway still wobbly or not capable of defending himself against other baboons.”

“When I let him out he came straight to the house, drank some water and then came to the back door,” Karen explained of Yogi who seemed to realize that the women had just helped him. “He was given lots of lovely treats. He was totally awake and a very happy baboon.” 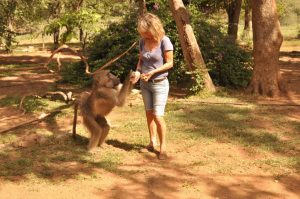 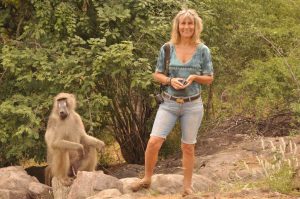 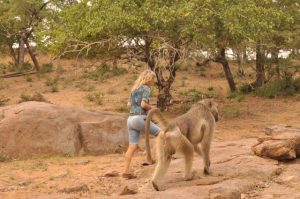