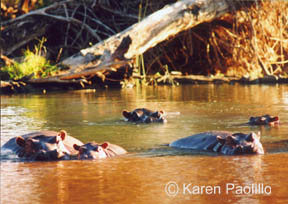 The photos shown here are of the hippos in their pool at the Chichindwi weir, where we initially used the sand pump back in May. The photos were taken in early July, one month after we had removed 2500 cubic meters of sand. As you can see there is a large wall of solid sand bearing down upon the hippos’ pool. They rest their heads against this barrier of shifting sand, with the part of the pool that is free from sand just behind them. By early July one quarter of the pool was left for them to submerge in, and sharing the pool with them were three crocodiles. The youngest hippo in the family, Kuchek, a  male born in March of 2001, showed his displeasure at this encroaching sand by constantly climbing up onto it. The photos show just how shallow the river is, mere inches in depth, just out of the rapidly shrinking pool. The sand moves relentlessly along, continuously entering the pool and diminishing its size. Kuchek’s light weight made it possible for him to walk on this sand. The larger hippos would sink if they tried to follow his action. Libra, a female of nearly four years of age, protectively raised herself up in the river behind Kuchy as he explored the wall of sand. From the day the hippos moved back into their pool on the 30th May, I spent each day observing their behavior. As the days flew by, the encroaching sand haunted my sleep. I constantly worried about the hippos being left waterless as their home shrunk before my eyes. The Turgwe river had been destroyed by cyclone Eline.

This conservancy now suffered from the onslaught of man’s politics. Poachers roamed the land killing as many of the wild animals as they could, but for money, not for food. Invaders took over land unsuitable for agriculture as an excuse to terrorize the land owners and the workers, to destroy wildlife and the environment. There was burning of the bush, cutting of the trees, total lawlessness. Whilst this situation prevailed, I still spent as many hours as possible observing the Turgwe Hippos. Their lives were not only at stake from being poached and caught in the awful wire snares but their very own home, the Turgwe River, had changed beyond all recognition. I could not remain dispassionate whilst young Kuchy pranced around on the sand that threatened his water home. Nor could I just say to myself “well nature will decide if these animals will survive or die”. Man had already interfered with nature so was it now up to man to try and solve the problems facing these Turgwe Hippos.

For over thirty years, weirs within the TurgweRiver have been home for the hippos during the dry season. In the rain the river ran, but during the dry period this once perennial river became an annual flow, with separate parts. The weirs had created pools, the rocked and cemented wall across the river causing water to be held back as much as one mile in distance, with the depth being the height of the wall- usually around four to five feet. For years the hippos had lived like this, in two groups, a dominant bull in each group: Bob in the one and Happy controlling the other family. For the last eleven years, I had the privilege to watch these hippos, learning daily about their behavior, seeing each new calf grow. During those 11 years we had problems. Initially, there was a drought to beat all droughts.1992 saw the total demise of the TurgweRiver. Yet 13 of the 15 Turgwe Hippos survived, thanks to  the generosity of total strangers. I managed to feed them for ten months, and my husband built them a temporary water pan. A cemented structure with walls at the bottom and top of this pan gave them an area to submerge. This stopped any dehydration. We also managed to build a water trough, allowing them to drink clean water. All water pumped from underground boreholes over ten miles away. During that time, some people said to me: “Let them take their chance, if they all die then that is nature’s way, man should not intervene against a natural disaster like a severe drought.” I let these statements take root within my own thoughts but I found myself arguing against such sentiments. We “man” had moved years ago into the hippos’ territories, bringing our cattle. More  people moved upstream of the animals- in fact, hundreds upon hundreds of people. These same people used the TurgweRiver, growing their vegetables upon its banks, the water being handier to reach there. Man then dammed the Turgwe for more crops and vegetables to grow over 50 miles away, but even so- a perennial river slowly began to die. Man altered the river’s natural course with his dam, with erosion and gullies that formed, and the habitat slowly changed. So “man” now had decided to form a wildlife conservancy. The people who owned the land looked at it as the most profitable solution for their own businesses. In their case, this business was safaris either for hunting or eco-related and photographic. The future of this area was once more in the hands of man but supposedly for wildlife to have a future as well. In my case, the hippos and my respect for them came from the heart, not from the pocket. They do not belong to me. In fact, our Trust- the Turgwe Hippo Trust- is non-profit. It is there purely for their future, for the hippos to have a chance at safety in their wild habitat, and to hopefully improve their conditions when needed through the building of back up pans for droughts, and more weirs to hold pools in a dying river. Sure, nature has now given us a new problem: the cyclone destroyed three of the four weirs, the river is full of sand. But the sand is not just from nature and the immense flooding that occurred. The sand comes from exposed areas covered in the flooding water during that period, also from the weir upstream that broke when its accumulated amount of sand was washed down. The eroded banks brought even more sand and now, for the first time in thirty years, the Turgwe river is more sand than water. But what of the future of these hippos? 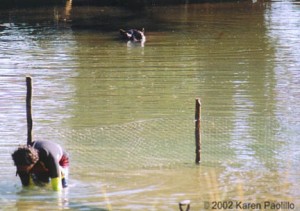 yesterday, 13th August, Jean-Roger was nearly finishing up for the evening, at approximately 4.20pm when his attention was caught by a noise. He turns around and finds a hippo just about to enter the pool only twenty feet from where he was working. Jean stood up in shock and fortunately this movement caused the hippo to take note of this strange thing in the pool dressed in a black wet suit. The hippo did an about-turn and headed back into the bushes. Jean-Roger came up to the house to get me but by the time I got back down there the hippo was gone. Checking the spoor I would say it was either one of the youngsters, Libra or Odile, but big enough to give one a fright. She must have had quite a shock seeing a man in her pool but I hope later that night she took advantage of the pool, and that soon all of them will be able to get back in and enjoy the security of their home for another couple of months. Poor Jean-Roger has a very stiff back from daily bending and removing mountains of hippo dung that tries its hardest to clog up the suction pump! Never a dull moment in Africa!!!!!!!

P/S  August 18th- 18 hippos moved back into their pool last night. All are fine, thank goodness. This means we have had to stop the work which we intended to finish on Sunday night, so that is not so bad. We are letting them settle in now and tomorrow will try to remove the pipes and the pump without causing them too much disturbance. Another crocodile has also joined the one that was there when Jean worked in the pool yesterday.  So we believe between the crocodiles and the hippos we are being told that our services are no longer required for now. Hopefully, we will get early rains and not need to pump the pool again in October but I will keep you all posted.  It is too wonderful to see 18 hippos back in their home especially since it has suddenly got extremely hot in the last few days and they all need to keep submerged. Jean has a very, very sore back but watching the hippos has made the pain worthwhile. They do not have as deep an area as before, as their defecation had caused a large amount of hard soil, sand and dung to accumulate, making it hard for Jean to go down as deep, but they all can submerge. Young Kuchek moved in front of me to about fifteen feet this morning, as if to say thanks. I wish you all could see the hippos back in their pool.