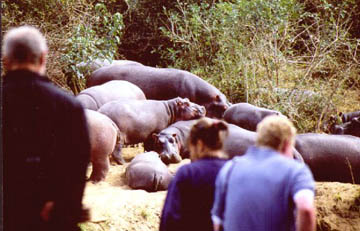 “Hi my lovelies, hello my beauties, Hi my lovelies, hello my beauties” is what Karen Paollillo repeats over and over again as we approach 18 representatives of Africa’s most dangerous animal species. From behind the Baobab tree we are slowly moving towards what is left of their pool. Karen’s well known voice makes the hippos relax. Within a few minutes we are at a distance of just 20 meters. Bob, the dominant male that I foster, is a huge bull that is doing what he likes most: as little as possible. Like all other members of his family he is lying in the pool, or what is left of that, to stay cool. Sitting this near makes you feel part of the family right away. This is a unique chance to see my favorite animal, study the different members of the group, get to know their faces and feel united with this beautiful spot and its inhabitants.

This is how close we can approach them

It becomes clear the next few days that Karen and her husband Jean -Roger are part of this family to. Four years ago, right after my first visit to Zimbabwe, I read an article in a Dutch newspaper about an eccentric lady trying to conserve a group of hippos in a remote part of southern Zimbabwe. On that holiday trip I spent a lot of time on the riverbanks of the Shire River, Lake Malawi, Zambezi River and the Okavango Delta. We saw lots of hippos swimming and sometimes making fake attacks at our canoes. When we camped on the banks of these waters they sometimes grazed so near that we could hear the grass pulled out of the ground. Especially their honking, laughing sounds became a dear memory to my friends and me.
So after reading the article, we, the Zambezi Six, decided to foster Bob as a living souvenir of our trip. Two years later I found the e-mail address of Karen through the www.savethehippos.com website and started a correspondence. Karen’s stories made me so enthusiastic that I decided to visit Bob and her at the first opportunity. The increasing amount of negative publicity about Boss Bob Mugabe harassing his political opposition and destroying Zimbabwe’s economy did not stop me. I thought a little support for these two loonies trying to save hippos in this turmoil could do some good.
Considering the newspaper stories in the last few months about fuel shortages our journey went very smoothly. After arriving in Bulawayo by Translux bus we rented a small Mazda 323 2-wheeldrive. In the Avis office they expected us thanks to prior email contact. Because of possible lack of fuel we bought an extra can of petrol and off we went.
Karen and Jean’s Turgwe Hippo Haven lies in the Save Valley Conservancy some 400 kilometers from Bulawayo. A very good tar road leaded us first to Masvingo and than to the east to the gate of the conservancy. After that there is 60 K corrugated dirt road left, but the Mazda negotiated it very well. At the Turgwe River Crossing we meet Karen and Jean-Roger for the first time. We followed the Landrover of the Turgwe Hippo Trust slowly through the water and up to their place. An easy 6 hour journey and there was plenty of fuel available.
Karen is a rather small very lively, active, always busy woman and John is a much bigger, more quiet seemingly laid back force at the background. Both have the heavy tan and wrinkled faces of outdoor people living in a country like this. Karen and John have built their own bush house. It’s a lovely place with a huge roof of grass. In the windows there is no glass but mosquito maze, which gives the sensation that you are still right within nature. It is like living in a very solid and huge tent. Until the war-veterans arrived close to this area Karen and Jean used to sleep outside. They have moved in now but still it is like being one with the environment night and day. We stay at in a very nice little cottage with a beautiful stone floor. The shower gives us the feeling of being in a 500$ a night safari lodge. At night you can hear our hippos laugh and in the morning the Vervet monkeys and baboons play tag around the cottage and, when you stay in bed too long, on the roof. In this time of year, it is July, it can be rather cold at night (5 -10 degrees Celsius) but because of the roof Karen and Jean don’t have a stove or a fire. A fleece jacket and a hot cup of tea will have to do the job. The million stories they tell about their neighboring professional hunters, about the hippos and other wildlife, about war vets and African politics make you warm-up right away too. We have brought some food and groceries for the four days we will stay. From the first cup of tea our hosts are making we feel right at home and part of the (rather large) family. Apart from hippos and monkeys we meet some other family members as soon as it gets dark. Warthog Arthur comes at the kitchen door to show us his wife and two kids. Although they are very wild Karen is allowed to stroke Arthur as he is eating his game pellets. 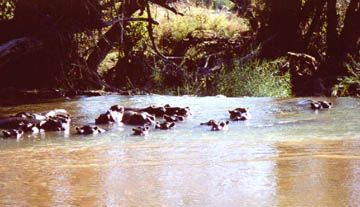 18 hippos can be a crowd

The next few days we spent observing the hippos. I can not repeat all the facts and stories Karen is telling us about them. The longer we see them the more differences we see between the different members of the group. Especially Blackface is easy to recognize because she is lacking the normal paler area around the eyes and head around the eyes. Its is important to recognize because she is by far the most aggressive one. The stories of her 3 charges on Jean keep us very alert not to annoy her at this very short distance. The fact that hippos kill dozens of Homo sapiens in Africa each year make these visits to their pool a breathtaking experience. This pool is a constant source of worries for Karen. In April 2000 a hurricane caused a gigantic flood in Mozambique and the southeastern part of Zimbabwe. From the cliff on which the house is located the valley of the Turgwe River looks at least 500 meters wide and 50 meters deep. Still you can see the debris of this flood hanging in trees just 20 meters below our feet. The amount of water then must have been enormous.

In the dry season that followed the water sank to its normal very shallow level again, but the whole area had changed. The biggest change is that a huge amount of sand has filled the riverbed and is still on the move. There used to be four weirs to form pools for the hippos but three have been washed away. So there is only one essential pool left for Bob’s family. Enough deep water is of vital importance for the hippos so that they can keep their body temperature constant. It’s literally their safe haven.

The big problem is that this pool is filling itself with sand in a couple of months. At this moment the spot that is deep enough for them to submerge is reduced to a 10 by 20 meter area and its becoming smaller every day. Karen and Jean are busy organizing a pump now to enable them to suck out the sand. As we are in Africa and in a remote spot this has already taken a lot of time and will cost a lot of money. Next week after we have left Jean has to get in the pool with the suction pipe while 18 hippos and three crocodiles are watching him. He has to remove hundreds of cubic meters of sand to clear an area of 65 meters by 25meters. Jean expects that it will take a couple of weeks of working in waist deep water, sometimes chest deep.
He did it before in May (with 6 people) and is very optimistic now because he now has a wetsuit to prevent his body temperature to fall. I think there are plenty of problems left to worry about but Jean does not complain. Like I said and thought before: you have to be (happily) disturbed to do this.
Now that I am back and writing this story I know that they have succeeded and are still safe. The hippos have all returned to their man made pool and the big question remains how many times this Sisyphus job has to be repeated. Jean is complaining about a stiff back, which from here sounds better then chewed off legs or a run down head. 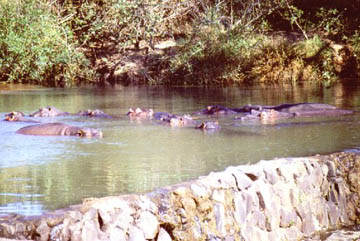 The only remaining weir in the Turgwe River

We spent our 4 days here in a quiet colonial rhythm. When we are not observing the hippos we patrol the area and search for snares. The nearby group of so called war veterans has begun to raid the conservancy, cut down the trees, starting fires and trying to poach as many animals as they can. The saddest thing is that their main goal is not their own feeding,. They sell the bushmeat to traders who buy it for expensive restaurants. They use snares to catch the game and any type of animal can get trapped. Most animals will struggle for days before they die a very cruel death. The bigger animals and even the hippos can get severely hurt, they get infections and can also die. Karen is very worried about these snares specially because now that the pool is so shallow the hippos are likely to start wander around and get caught. Luckily we do not find any snares or tracks of poachers but patrolling and letting to them know you are there will stay an important job.

When we are not walking we sit quietly, watch the abundant birds, drink the tea that Jean and Karen are providing, eat the fine meals they are cooking us, drinking the wine we brought and listen to all their bush stories.

Karen tells us a few times that she is not a peoples person and that she loves her animals more but we doubt if that’s true. Although we were complete strangers a few days ago we feel very much at home with these very special and lovely people and we do feel loved very much.
After 4 wonderful days that we will never forget its time to say goodbye. Its remarkable that when you leave people that you did not know four days ago you feel like deserting them and their hippos. We buy a lot of hippo gifts as a souvenir of this once in a lifetime experience.
When we say goodbye to Big Bob I think I see a reproachful face. When we drive back through this twisted up country I imagine what it will be like to come back in a more peaceful and prosperous Zimbabwe. Lets hope the people of this land will have the wisdom to change things soon